Patients who were treated with percutaneous repair were more likely to require surgery for residual mitral regurgitation (MR) within 1 year of treatment, but were less likely to need to surgery after 5 years with either percutaneous or surgical therapy, according to 5-year results from the EVEREST II (Endovascular Valve Edge-to-Edge Repair) study.

“Our findings suggest that the mechanical reduction of MR with percutaneous repair using this device is durable beyond 6 months,” the authors wrote in the study published in the Journal of the American College of Cardiology. “Additionally, because MR was reduced to a lesser extent following percutaneous repair compared with surgery, it is also an important finding that residual low-grade MR was not associated with either worsening MR or progressive [left ventricular] dilation.”

Researchers randomly assigned 184 patients with grade 3+ or 4+ MR to undergo percutaneous repair with the MitraClip device and 95 patients to have conventional MV surgery. They followed the patients for 5 years to measure freedom from death, additional surgery for MV dysfunction, and 3+ and 4+ MR.

The 1-year analysis revealed that percutaneous repair was less effective than surgery, but that the safety was still superior. The authors noted that both procedures improved quality of life.

They concluded that these 5-year results, “support the durability of MR reduction observed after successful device implantation and resultant symptom alleviation and LV reverse remodeling, endorse the long-term safety of this approach, and refute concerns that greater residual MR after percutaneous repair results in reduced-long-term survival.” 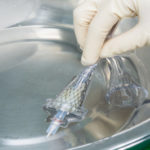