Of 189 patients with LN (median age 25 years, 78% female, and 73% White), 31% reported any r-ASCL, and 7% reported moderate to severe r-ASCL. After incorporating systematically re-examined r-ASCL grade using Banff grading criteria, the prevalence of any and moderate to severe r-ASCL increased to 39% and 12%, respectively, according to a team led by Shivani Garg, MD, MS, of the University of Wisconsin School of Medicine & Public Health in Madison, Wisconsin, where she is director of the UW-Madison Lupus and Lupus Nephritis Clinics.

Over 11 years of follow-up, 22 incident ASCVD events occurred. “Using a composite of reported and over-read r-ASCL grade, we found that severe r-ASCL in diagnostic LN biopsies was associated with 9-fold higher odds of ASCVD,” the investigators reported in Arthritis Care & Research.

The study also confirmed that CKD stage 3 or higher at the time of LN diagnosis is an independent determinant of subsequent ASCVD occurrence.

In an interview, Dr Garg noted that previous studies demonstrated that patients with LN who developed ASCVD were significantly younger than peers without LN who developed ASCVD. ASCVD risk was 42 times higher in patients with LN who were aged 30 to 39 years. “These studies underscore a possible role of immune-mediated and inflammatory risk factors in addition to traditional risk factors as contributors to significantly accelerated ASCVD risk in LN patients,” Dr Garg said.

In a previous study, Dr Garg and colleagues found that the burden of r-ASCL in diagnostic LN biopsies was significantly higher and occurred earlier in patients with LN, starting from 30 to 39 years of age. “Therefore, these findings support a mechanistic association between the presence of r-ASCL in LN biopsies at the time of LN diagnosis and ASCVD occurrence in LN patients, which led to this study,” Dr Garg said.

The findings of this innovative study will form the basis to further investigate the role of severe r-ASCL as a predictor of ASCVD events in larger LN cohorts, she noted. 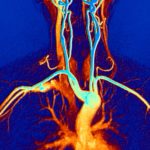