HealthDay News — Height is an independent predictor of venous thromboembolism (VTE), according to a study published online in Circulation: Cardiovascular Genetics.

Bengt Zöller, MD, PhD, from Malmö University Hospital in Sweden, and colleagues used data from Swedish national registries to identify 1,610,870 male conscripts born between 1951 and 1992 without previous VTE. They were followed from enlistment (1969-2010) until 2012. Separately, 1,093,342 first-time pregnant women from the medical birth register, without previous VTE, were followed from first pregnancy (1982-2012) until 2012. All full-sibling pairs discordant for height were identified.

The researchers found that compared with the tallest women (>185 cm) and men (>190 cm), there was a graded decreased risk by lower height for both men and women. The risk was lowest in those with the shortest stature (<155 for women and <160 cm for men): hazard ratios (HR), 0.31 and 0.35, respectively. There was also a graded association in the cosibling design comparing siblings with different degrees of discordance for height (reference was the taller sibling): ≥10 cm difference between brothers (HR, 0.69) and sisters (HR, 0.65).

“The use of sibling pairs reduces the likelihood that familial confounding explains the results. The findings are important for the understanding of the pathogenesis of VTE,” the authors concluded. 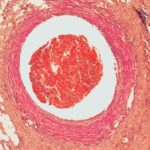