HealthDay News — The global lifetime risk for stroke was 24.9 percent among adults aged 25 years and older in 2016, according to a study published in the Dec. 20 issue of the New England Journal of Medicine.

Valery L. Feigin, M.D., Ph.D., from the University of Washington in Seattle, and colleagues calculated the cumulative risks for first stroke, ischemic stroke, and hemorrhagic stroke among adults aged 25 years and older using the Global Burden of Disease Study 2016 estimates of stroke incidence.

The researchers found that starting from age 25, the estimated global lifetime risk for stroke was 24.9 percent, with risks of 24.7 and 25.1 percent for men and women, respectively.

“In low-SDI countries …, the estimated lower lifetime risk of stroke is the result of a high competing risk of death from any cause other than stroke at both younger and older ages and does not necessarily represent a lower incidence of stroke or more effective prevention and treatment strategies,” the authors write. 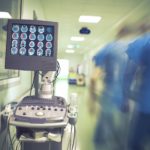