HealthDay News — Younger onset of type 2 diabetes is associated with increased mortality risk, mainly due to cardiovascular disease (CVD) mortality, according to a study published in Diabetologia.

Lili Huo, MD, from Beijing Jishuitan Hospital, and colleagues examined data from 743,709 Australians with type 2 diabetes who were registered on the National Diabetes Services Scheme (NDSS) between 1997 and 2011. By linking the NDSS to the National Death Index, mortality data were derived; all-cause mortality and mortality due to CVD, cancer, and other causes were identified.

The researchers found that there were 115,363 deaths during 7.20 million person-years of follow-up. The rates of all-cause and cancer mortality declined and CVD mortality was constant during the first 1.8 years after diabetes diagnosis.

“Our findings suggest that younger-onset type 2 diabetes increases mortality risk, and that this is mainly through earlier CVD mortality,” the authors wrote. “Efforts to delay the onset of type 2 diabetes might, therefore, reduce mortality.” 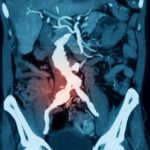 Aortic Disease Risk May Be Attenuated by Type 2 Diabetes