A retrospective cohort study was conducted between January 2005 and April 2021, in which data from the JMDC Claims Database (JMDC Inc., Tokyo, Japan), a health checkup and insurance claims database, were used. Researchers sought to identify the clinical effect of a decrease in BP on incident CVD among individuals with both diabetes mellitus (DM) and hypertension. They obtained data on a total of 1,189,289 individuals who had undergone the health checkup bloods tests required by JMDC, including blood tests over 1 year after insurance enrollment.

Patients were classified with stage 1 hypertension (systolic BP [SBP] of 130-139 mm Hg or diastolic BP [DBP] of 80-89 mm Hg) or with stage 2 hypertension (SBP of ≥140 mm Hg or DBP of ≥90 mm Hg), based on the American College of Cardiology/ American Heart Association BP guideline. To be included in the study, patients needed to have BP data available 1 year following insurance enrollment.

Per interaction analyses, the effect of BP reduction on incident HF was mitigated in individuals with prediabetes or DM. A variety of sensitivity analyses were performed that confirmed these results.

There are several limitations in the study, including the BP and FPG values are from a single health checkup and may not accurately reflect an individual’s BP or FPG phenotype. Further, because of the observational design of the study, the investigators are unable to render any conclusions regarding possible causal association.

“The optimal management strategy for hypertensive people with prediabetes or DM for the prevention of developing CVD (particularly HF) needs to be established,” the researchers wrote. 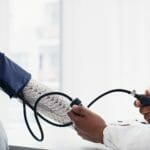