Researchers selected adults in the Scientific Registry of Transplant Recipients database who were awaiting OHT from 2004 to 2014 and assessed outcomes based on heart disease type. The primary end point was time to all-cause mortality, censored at last patient follow-up and time of transplantation. Survival by type of cardiomyopathy was evaluated using multivariable Cox proportional hazard models.

Meanwhile, restrictive cardiomyopathy patients (3% of the total cohort) had the highest percent of prior malignancy. This group had slightly more patients compared to other subgroups requiring dialysis, but with fewer patients receiving temporary or permanent circulatory support, and mechanical ventilation.

Ischemic cardiomyopathy patients made up 38% of the total cohort with a larger proportion of older patients (mean age: 58 years) and more men compared to the other subgroups. These patients had the highest frequency of diabetes, peripheral vascular disease, and permanent mechanical circulatory support.

Hypertrophic cardiomyopathy patients made up 2% of the total cohort (mean age: 46 years) and were mostly white. These patients had the highest usage of ICDs and there were relatively few patients on mechanical circulatory support, inotropes, dialysis, or mechanical ventilation.

The smallest subgroup was valvular cardiomyopathy (mean age: 54 years) with the highest use of antiarrhythmic medications and inotropes, but relatively low use of mechanical circulatory support, dialysis, or mechanical ventilation.

Patients with congenital heart disease were the youngest of the total cohort (mean age: 36 years), mostly white, and had the lowest body mass index levels.

“Our research is the first to document differences in adult outcome based on type of cardiomyopathy while awaiting heart transplantation,” the authors noted. “The results for adults with restrictive cardiomyopathy are similar to pediatrics. Poor survival among patients with heart diseases like restrictive cardiomyopathy, congenital heart disease, and “other” may be due to differences in the underlying disease or our ability to rescue patients with inotropes and permanent mechanical circulatory support while they wait for transplantation.”

“A revised heart allocation scheme has been proposed that will recognize these subgroups and should account for the disadvantaged,” they concluded. 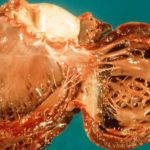