The Aldosterone Targeted Neurohormonal Combined with Natriuresis Therapy in Heart Failure (ATHENA-HF) trial is in progress to determine if high-dose spironolactone will reduce N-terminal pro-B-type natriuretic peptide (NT-proBNP) levels from randomization to 96 hours compared with standard care in heart failure.

Javed Butler, MD, of Stony Brook University in New York, and colleagues are conducting a randomized, double-blind, placebo-controlled study on the safety and efficacy of 100 mg/d spironolactone vs placebo in 360 patients hospitalized for acute heart failure. Investigators are also studying safety end points, including serum creatinine and hyperkalemia incidence from randomization to 96 hours post-randomization.

Patients were included if they were hospitalized with at least 1 sign and 1 symptom of acute heart failure with an NT-proBNP ≥1000 pg/mL or BNP ≥250 pg/mL measured within 24 hours of randomization.

“The low dose mineralcorticoid receptor antagonists (MRA) used in chronic HF [heart failure] are believed to benefit patients by anti-fibrotic but not natriuretic effects,” the authors explain. “Inhibition of mineralcorticoid receptors at higher MRA doses may cause significant natriuresis. Resistance to loop diruetics in acute HF may be overcome by natriuretic doses of spironolactone (>50 mg/d).”

They also pointed out that even with symptom relief, hospital readmission and mortality risks will remain high if natriuretic peptide levels stay elevated in patients with acute heart failure, and that the best outcomes are seen when levels decrease by >30% while in hospital.

“There remains a need to find novel interventions that effectively and safely promote dieresis and improve outcome in AHF [acute heart failure],” Dr Butler and colleagues wrote. “MRA [mineralcorticoid receptor antagonist] therapy has shown benefit across the spectrum of chronic HF with reduced ejection fraction and a suggestion of benefit in those with preserved ejection fraction as well in certain regions.”

If the trial demonstrates promising results, ATHENA-HF could provide a basis for a more defined outcome trial in acute heart failure, they concluded. 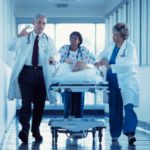