While the link between hypertensive disorders of pregnancy (HDP) and cardiovascular disease is not well understood, researchers may have made significant progress toward bridging that gap, according to a study published in JAMA.

Both women with HDPs and women with normotensive pregnancies were identified using the National Patient Register and Medical Birth Register from 1978 to 2012 in Denmark (N=1 075 763). An HDP was defined as moderate or severe preeclampsia (including eclampsia and HELLP syndrome [hemolysis, elevated liver enzymes, low platelet count]) or gestational hypertension. Women registered with any cardiovascular disease (including hypertension) or diabetes 1 month before their first registered delivery were excluded, as well as any women with pregnancies lasting fewer than 20 weeks.

The primary outcome was development of cardiomyopathy >5 months after delivery up to 34 years, 7 months.

Researchers devised 2 covariates: variables considered a priori to be potential confounders (eg, birth year, age, smoking, parity, multiple pregnancy, and stillbirth) and variables that might be confounders but could also be intermediates linking HDP and cardiomyopathy or competing causes of cardiomyopathy (eg, postpregnancy diabetes, ischemic heart disease, hypertension, and obesity). “Obesity and incident postpartum diabetes were judged to be true potential confounders,” the authors stated.

“In this study, HDPs were associated with a lasting (>5 years postpartum) increase in risk of cardiomyopathy beyond the peripartum period, regardless of HDP severity,” the authors wrote. “However, cardiomyopathy events are rare, even among women in this study with a history of HDP (rates in women with a history of HDP, based on our date, were 14.6-17.3 cases/100 000 person-years.”

They noted that issuing a similar guideline such as the American Heart Association’s recommendation for monitoring of ischemic heart disease would not be justified for cardiomyopathy, “regardless of the strength of the observed association with HDP.” However, it would be wise to suggest physicians consider this association in the diagnostic workup of women with a history of HDP presenting with possible heart failure symptoms.

“Women with a history of [HDP] compared with women without such a history, had a small but statistically significant increased risk of cardiomyopathy more than 5 months after delivery. Further research is necessary to understand whether there is a causal mechanism behind this association,” researchers concluded. 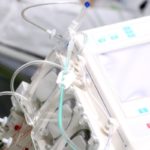