In a recent study, distinct phenogroups were detected in patients referred for symptoms of heart failure (HF) but not yet identified as HF. These phenogroups, along with their circulating biomarkers profile might help clinicians’ understanding of the early stages of HF with preserved ejection fraction, according to findings published in ESC Heart Failure.

Outcomes for HF with preserved ejection fraction (HFpEF) include enormous medical expenses, poor quality of life, and often death. The intent of the Heart Failure Association Pre-test assessment, Echocardiography & natriuretic peptide, Functional testing, Final etiology (HFA-PEFF) score is to improve diagnosis and help early detection of HFpEF in patients presenting with symptoms that may or may not be HF.

To accomplish this, researchers conducted a retrospective study of the prospective, single-center HELPFul cohort study at the Cardiology Centers of the Netherlands (CNN), Utrecht, Netherlands, and included 507 patients (aged ≥45 years) with non-acute possibly cardiac-related symptoms, but without history of HF, coronary artery or congenital heart disease, or previous cardiac interventions, and with left ventricular ejection fraction (LVEF) of 50% or greater.

Of the 92 Olink proteins analyzed, 32 significantly differed among the phenogroups. The top 8 proteins, which were mostly engaged in inflammation and extracellular matrix remodeling, are believed to be among the important functional changes in the HFpEF process.

Study limitations included the case-cohort cross-sectional design and use of non-fasting blood samples. There was also a lack of pertinent information and of exercise echocardiography or invasive hemodynamic stress testing.

Researchers concluded that their study, “identified distinct phenogroups by using the HFA-PEFF domain scores in ambulant subjects referred for HF-like symptoms. The newly identified phenogroups accompanied by their circulating biomarkers profile might aid in a better understanding of the pathophysiological processes involved during the early stages of the HFpEF syndrome.” 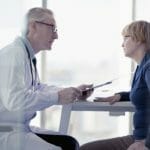 History of Female Infertility Tied to Risk for Heart Failure