Use of histamine H2 receptor antagonists (H2RA) was associated with a reduced risk for incident heart failure (HF) in a cohort of patients from the MESA study (Multi-Ethnic Study of Atherosclerosis), according to research published in the Journal of the American College of Cardiology.

H2RAs are known for their role in treating gastroesophageal reflux disease, but may also be useful in cardiac disease. As the authors explained, “similar to beta receptors, H2 receptors activate stimulatory G-proteins in the myocardium.”

Both HF and HF with reduced ejection fraction (HFrEF) benefit from H2RA use, resulting in smaller LV volumes and a reduction in symptom severity. H2RA has previously been associated with lower right ventricular mass and smaller volumes.

A total of 6378 men and women from the MESA study were included, 313 of whom used H2RAs and 6065 did not. The original study recruited individuals aged 45 to 84 years from 6 US communities. Any person who used prescription or over-the-counter H2RAs was considered an “H2RA user” in the primary analyses.

“Exploratory analyses evaluated associations between H2RA use and HF in groups with differing predicted risk,” the authors wrote. “These analyses were predicated on the hypothesis that, if a treatment effect exists, it might be most apparent in individuals at the highest risk for HF.”

Of the total number of participants, 4691 completed a baseline cardiac magnetic resonance imaging (CMR). These were included to describe cross-sectional associations between H2RA and LV morphology. After a median of 9.4 years from the first CMR, a follow-up CMR was obtained in 2806 patients (H2RA users=107; non-users=2699) and those participants were included in the cohort that described associations between H2RA use and longitudinal changes in LV.

However, the authors noted that because of the low number of HF events among the H2RA users, “this study could not reliably characterize important differences between types of HF relative to H2RA use. Importantly, this included an inability to characterize differences in HFpEF [HF with preserved ejection fraction] relative to HFrEF.”

HSRAs need to be evaluated in randomized trials to confirm whether they can influence the development of HF. 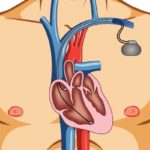