E/e′ value was an independent risk factor for stroke and systemic embolism, and no significant differences were found in the incidence of major bleeding across the groups.

Among several study limitations, the investigators noted that follow-up echocardiography data were not available, so reversible left ventricular dysfunction was not detected. Also, the follow-up duration was relatively short, and the types of oral anticoagulants that were used were not consistent within the cohort. 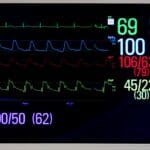