Vasodilator stress, rest myocardial perfusion cardiovascular magnetic resonance (CMR), and late gadolinium enhancement (LGE) imaging were found to have high diagnostic accuracy for coronary artery disease in a pair of clinical trials, according to a study published in the Journal of the American College of Cardiology.

“These findings supported the US Food and Drug Administration approval of gadobutrol-enhanced CMR (0.1 mmol/kg) to assess myocardial perfusion and LGE in adult patients with known or suspected coronary artery disease,” noted the investigators.

As the design and findings for the 2 GadaCAD trials were very similar, the results were summarized as a fixed-effect meta-analysis (n=764). In this cohort, the prevalence of coronary artery disease was 27.8% as defined by QCA stenosis ≥70%. For detecting a ≥70% QCA stenosis, the sensitivity of CMR was 78.9%, specificity was 86.8%, and area under the curve was 0.871.

Study limitations include the fact that a QCA reference to define coronary artery disease is imperfect but practical for large-scale recruitment, and that the GadaCAD trials did not test a higher dose of gadobutrol or different specific gadolinium-based contrast agents, limiting the generalizability of the results.

Disclosures: Some of the authors declared affiliations with pharmaceutical, diagnostic, and healthcare companies. Please see the original reference for a full list of disclosures. 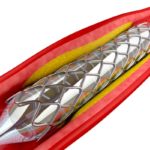