The presence of chronic total occlusions (CTOs) on noninvasive coronary computed tomography angiography (CCTA) was associated with late revascularization and an increased risk for major adverse cardiac events in a study published in Heart.

Patients with no prior history of coronary artery disease (CAD) were followed for a median of 26 months (N=22,828). Investigators performed CCTA to identify coronary lesions, which were graded as normal (no atherosclerosis), nonobstructive (1%-49%), moderate to severe (50%-99%), or completely occluded (100%). For the primary outcome, the researchers assessed whether CTOs on CCTA were associated with an increased risk for all-cause mortality and/or major adverse cardiac events, the latter of which comprised mortality, nonfatal myocardial infarction, and late coronary revascularization (≥90 days after CCTA).

The investigators found that this increase in the composite end point was predominantly driven by late revascularization in patients with CTOs. In the multivariable analysis, which compared patients with CTO with patients who had normal coronaries, patients with CTOs demonstrated a significantly higher risk for adverse cardiac events during follow-up (14.54 [95% CI, 9.11-23.20]; P <.001).

A limitation of the analysis includes its observational design, which may have introduced residual or unmeasured confounding despite multivariable adjustment.

According to the investigators, the study suggests there is an unmet “need for developing strict clinical surveillance and management plan (including the rationale for late coronary revascularisation) for individuals with CTO detected on CCTA” as a means of reducing mortality and major cardiac events. 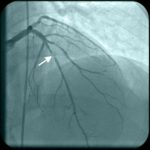