The researchers found that conversion to sinus rhythm occurred in 96 and 92 percent of patients in the drug-shock and shock-only groups, respectively (absolute difference, 4 percent; 95 percent confidence interval, 0 to 9 percent; P = 0.07). Overall, 97 and 95 percent of patients, respectively, were discharged home (P = 0.60). In the drug-shock group, 52 percent of patients converted after drug infusion only. In follow-up, no patients had serious adverse events. Similar conversions to sinus rhythm were seen with anterolateral and anteroposterior pad positions in protocol 2 (94 versus 92 percent; P = 0.68).

“Cardioversion in the emergency department is safe and effective,” Steill said in a statement. “We hope our results convince more physicians around the world to adopt these methods.” 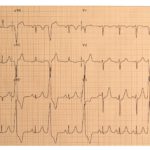 Detection of Arrhythmia, ACS Should Not Solely Rely on ECG Interpretation Programs