Implantable loop recorder (ILR) device screening may lead to a 3-fold increase in detection of atrial fibrillation and initiation of necessary oral anticoagulation therapy, but does not significantly reduce the risk of stroke or systemic arterial embolism in high-risk patients. This is according to research results published in the Lancet.

The LOOP Study (ClinicalTrials.gov Identifier: NCT02036450) is an investigator-initiated, multicenter, unblinded, randomized controlled trial at 4 centers in Denmark. Participants were between 70 and 90 years of age and had either hypertension, diabetes, previous stroke, or heart failure and did not have atrial fibrillation, a history of atrial fibrillation, or a pacemaker, or take anticoagulation medicine or be contraindicated to anticoagulation.

Participants were randomly assigned 1:3 to either the intervention group—who received an ILR—or the control group, who received usual care. Baseline assessments were undertaken for a detailed medical history, drug prescriptions, vital signs, and blood samples. ILR implantation took place 4 weeks after randomization, and all participants in this group were followed up via automated continuous ECG monitoring on a day-to-day basis. If atrial fibrillation of 6-minute duration was detected, patients were contacted and recommended to begin oral anticoagulation therapy.

Overall, 4.6% of 910 patients with atrial fibrillation who initiated oral anticoagulation therapy discontinued treatment (5.8% in the ILR group and 3.6% in the control group); median time from initiation to discontinuation was 16.8 months (IQR, 2.73-31.5).

Within the ILR group, 17 participants had a stroke or systemic embolism after atrial fibrillation began; 88.2% of these patients had already initiated oral anticoagulation, most episodes were short-lasting, and the time from atrial fibrillation to stroke ranged from 0 to 42 months.

Of the 1420 participants who received an ILR device, 0.6% reported complications leading to device explantation; time from implantation to explantation was a median of 40 days (IQR, 22-51). Eight of these participants had a new implantation in order to resume remote monitoring. Other adverse events included major bleeding (4.3% and 3.5% of the ILR and control groups) and hemorrhagic stroke (0.8% and 0.8%, respectively).

Study limitations include the use of registries to identify and recruit potential participants, which may introduce healthy user bias, and the reality of detecting asymptomatic atrial fibrillation in both short- and long-term episodes. 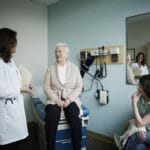