Atrial fibrillation (AF) is the most common sustained arrhythmia, and is associated with cardiovascular complications, thrombosis, and stroke.1 An estimated 5 million Americans 65 years of age and older experience atrial fibrillation, with the number predicted to double in 25 years.1,2 One in 5 patients diagnosed with AF initially presents with a cerebrovascular accident, and approximately 20% of AF cases are undiagnosed.1 With the projected increase in prevalence, it is important that clinicians have access to the most current screening and diagnostic tools for AF to prevent thromboembolic complications.

An irregularly irregular rhythm, an inconsistent first heart sound (S1), and palpitations make up the the triad of AF findings.6,7 Some patients may present with abnormal variants of AF, such as decreased heart rate and chest pain.7 However, a decreased heart rate is rare in AF because the arrhythmia originates above the atrioventricular node of the heart.

Screening for AF may be difficult, as it may be asymptomatic in the earlier stages. The goal of new screening criteria has been to detect AF in asymptomatic people.8 Patients that meet the criteria outlined in the CHA2DS2-VASc score are indicated for AF screening (Figure).9

Screening for cardiac arrhythmias begins with the physical examination. Clinicians ought to routinely assess patients’ pulse rate, rhythm, and heart sounds on each visit. An irregularly irregular rate and rhythm can be routinely screened for with pulse palpation in the primary care setting.8 Inspection of jugular venous pulsations can also indicate previously undetected AF.6 Detection of these abnormalities may also indicate a more life-threatening pathology, in addition to AF.

Further work-up is indicated for patients presenting with abnormal physical findings and major risk factors for AF. Current data suggest the CHA2DS2-VASc criteria may be beneficial for screening undetected AF. A retrospective studu has demonstrated a direct correlation between the CHA2DS2-VASc score criteria and new onset of AF.10 The CHA2DS2-VASc score assesses the risk of developing AF and experiencing a stroke, and acts as a guide to initiating anticoagulation therapy. Patients who are older than 65 years, female, or who have a history of congestive heart failure, hypertension, transient ischemic attacks, vascular disease, or previous stroke, are at increased risk for stroke according to the CHA2DS2-VASc criteria.9,10 Additional risk factors associated with stroke in patients with AF include excessive alcohol use, European ancestry, and left atrial enlargement.6

The CHADS2 and CHA2DS2-VASc scores have historically been used to guide anticoagulation therapy.9 Although both are helpful tools, the CHA2DS2-VASc is considered superior and is more widely recognized.11 The recognized highest risk factors (age, history of congestive heart failure, and hypertension) contribute to the self-propagating nature of AF development by inflammation, and structural and electrical remodeling.

Biomarkers are not currently sanctioned as predictors of AF in clinical guidelines but are being studied as a possible additional tool for screening and diagnosis of AF.1 Three types of biomarkers are associated with AF: electrophysiologic, molecular, and morphologic. Electrophysiological biomarkers include abnormal P-wave and J-wave electrocardiographic (ECG) findings. Prolonged P-wave duration >110 ms on any lead indicates erratic atrial firing. The presence of a J-wave in the QTc interval has been associated with AF development.1

Molecular biomarkers such as brain natriuretic peptide, troponin T, C-reactive protein, von Willebrand factor, fibrinogen, and various collagen peptides are associated with newly diagnosed paroxysmal AF. Structural factors such as size and function of the left atrium may serve as predictors of undetected AF. Even ribonucleic acid (RNA) and microRNA may be used in the future, but they are still under investigation. Biomarkers are not currently sanctioned as predictors of AF in clinical guidelines, but they may have a future usage.1

Technological advances have allowed cardiac rhythm monitoring accessibility on personal smartphones. In 2017, AliveCor made its debut into the smartphone market with its single-lead electrocardiogram (ECG), coined KardiaMobile. The device is used by placing the middle and index finger of each hand simultaneously on 2 electrodes. The application records a single lead ECG tracing from 30 seconds up to 5 minutes.12 The KardiaMobile was approved by the US Food and Drug Administration for medical-grade ECG recordings.13,14 KardiaMobile is currently an out-of-pocket expense purchased online, as it is not covered by insurance.

For patients unable to afford the KardiaMobile device, the Cardiio application (app) is free on iPhone and iPad, and the Accurate Heart Rate Monitor is free for for use Android smartphones. Both apps use photoplethysmography. Patients place their index finger over the camera and light of the smartphone and follow the prompts. Photoplethysmography technology uses the camera light to record blood flowing in the fingertip.

Smartphone applications demonstrate adequate sensitivity and specificity as screening tools for AF in the primary care setting.8,16 Being able to monitor rate and rhythm and screen for potential arrhythmia development with smartphone technology empowers patients to better partner with their clinicians in monitoring their health.

From the January/February 2020 Issue of The Cardiology Advisor 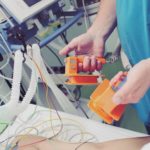