Patients with acute myocardial infarction (AMI) have similar outcomes when implanted with ventricular assist devices (VAD) compared to other VAD populations, despite being more critically ill, according to a study published in the Journal of American College of Cardiology.

Researchers selected patients from the INTERMACS (Interagency Registry for Mechanically Assisted Circulatory Support) registry who underwent VAD placement in the setting of AMI and compared their outcomes with patients who received VADs for non-AMI reasons.

After MI, cardiogenic shock is the most common cause of hospital death, and as the study authors explained, most of these deaths are due to low cardiac output and end-organ dysfunction from left ventricular pump failure. Therefore, mechanical circulatory support has become an established therapy for end-stage chronic heart failure, but its role in shock or low-output states resulting from AMI has not been thoroughly investigated.

A total of 502 patients with AMI as the diagnosis at hospital admission or major MI as a complication during hospitalization that resulted in VAD implantation were included in the study, along with 9727 patients who underwent implantation for non-AMI conditions (average age: 58.3 years; predominantly male). Follow-up was performed at 1 week, 1 month, 3 months, 6 months, 12 months, 18 months, and every 6 months thereafter.

Patients with AMI were more likely to have severe diabetes, be current smokers, and have peripheral vascular disease compared to the non-AMI patients. AMI patients were also likely to have fewer previous cardiac surgeries and hospitalizations before VAD implantation. They also had higher early rates of bleeding, arrhythmia, infection, neurological dysfunction, renal dysfunction, thromboembolism, and respiratory failure.

According to INTERMACS profile criteria, 66.7% of AMI patients were categorized as level I (“critical cardiogenic shock”) and 19.1% as level II (“progressive decline”) at implantation. Furthermore, 94.8% had low output states that required inotropes and/or temporary circulatory support.

“Durable VAD implantation is an effective management strategy and should be considered early for patients with MI and low output states who do not respond to medical therapy,” researchers concluded. “Additional studies are needed to better understand the molecular and metabolic mechanisms responsible for cardiogenic shock and the response to mechanical support. 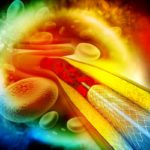