Calcium activity was detected in microglia calcium during the hyperacute phase of ischemic stroke, according to study results presented at the American Heart Association (AHA) Scientific Sessions 2020, held virtually from November 13 to 17, 2020.

Mice from a line which expressed RNA Polymerase II Subunit A (Polr2a)-based GCaMP5 and Cre-dependent tdTomato were used for this study. Cerebral ischemia was induced between 8 and 10 weeks by occlusion of the middle cerebral artery with silicon-coated filaments. The brains of the mice were imaged 2 hours after the artery occlusion or sham procedure to record early (ie, 0-6 hours) and late (ie, 6-24 hours) hyperacute phenotypes.

At 20 hours after occlusion, 18 wave-like calcium activities were recorded in 3 mice who were imaged for 5 hours each. These microglial calcium waves decreased in frequency from 8 during the first 6 hours, to 6 between 6- and 12-hours post occlusion, to 4 waves in the 12- to 20-hour period after induced stroke. Despite the decrease of events, the amplitude of calcium increased over time.

High-speed recordings revealed robust calcium transients with an average (among 2 mice) of 15 seconds, which were more pronounced during the early hyperacute phase.

Microinjections of potassium chloride elicited similar waves of calcium, 60 seconds after injection, which traveled along the same trajectory from the injection site. These waves had a velocity of 6.7±1.99 mm/min which was more rapid than waves detected after stroke (4.9±1.71 mm/min).

Mice were given the calcium release-activated channel inhibitor CM-EX-137 orally 4 hours before stroke induction. The cells which had the greatest response had a 20% decrease in microglial calcium peak intensity compared with controls (0.61±0.05 to 0.49±0.03, respectively; P =.04) and a 26.7% decrease in the area under the curve (10.64±1.01 to 7.80±0.57, respectively; P =.014); indicating a partial role of store-operated calcium channels during the calcium wave response.

This study was limited by the fact that a single channel type mediating the calcium response was investigated. 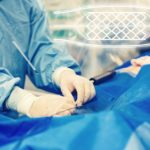