Version 1 of the QCovid algorithm, a risk prediction tool developed in the UK for stratifying patients according to their risk of COVID-19 hospitalization and mortality, has demonstrated accuracy in a Scottish study. Results of an external validation analysis of the risk prediction tool were recently published in the journal Thorax.

Researchers evaluating the accuracy of the QCovid algorithm created retrospective cohorts using records of patients registered with a primary care practice in Scotland between March and October 2020. During the acute phase of the pandemic, the investigators established community-based COVID-19 hubs, which were intended to segment patients and reduce their risk for nosocomial infections. Data from the 940 Scottish primary care practices were linked to reverse-transcription polymerase chain reaction virology, hospitalizations, and mortality rates.

The dataset used in the QCovid algorithm comprised a total of 5,384,819 individuals, which represented 99% of the estimated population residing in Scotland. Individuals between 19 and 100 years of age were included in the current study. The initial period of the analysis occurred from March 1 through April 30, 2020; the second period of the analysis was between May 1 and June 30, 2020. Any individuals who experienced an outcome event — ie, hospitalization or death from COVID-19 — in the first period were excluded from any analysis in the second period.

The investigators concluded that although version 1 of the QCovid algorithm demonstrated high levels of discrimination in the prediction of risk from COVID-19–related hospitalizations or deaths in Scotland in the original 2 time periods evaluated, it will likely require ongoing prospective recalibration. The time period covered in version 1 of the algorithm corresponds to the “first wave” of the pandemic in the UK — a time during which treatments were limited. Currently, versions 2 and 3 of the algorithm are under development; vaccination status and evidence of previous infection will be incorporated as COVID-19 predictors in version 3. 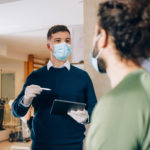 Report Highlights Characteristics of Omicron SARS-CoV-2 Variant in US