The updated US Preventive Services Task Force (USPSTF) recommendation on daily low-dose aspirin therapy for preeclampsia prevention in patients at high risk for preeclampsia is consistent with the 2014 USPSTF recommendation; however, it is strengthened by new evidence demonstrating a reduced risk of perinatal death with low-dose aspirin use and additional safety data.1,2 Despite the effectiveness of aspirin therapy, studies show inconsistent implementation of this recommendation particularly among non-Hispanic Black patients.3

Low-dose aspirin (81 mg/d) should be initiated after 12 weeks gestation in patients at high risk for preeclampsia, according to both the 2014 and 2021 recommendations. “What differs from the 2014 recommendation is that there is new and better evidence that low-dose aspirin lowers the infant mortality rate,” Task Force member Michael Silverstein, MD, said in an interview. “This intervention actually saves lives of newborn babies.”

“The Task Force is calling for more evidence around how to fully implement this recommendation statement,” said Dr Silverstein, who is professor of pediatrics, director of the Division of General Academic Pediatrics, and vice chair of research for the Department of Pediatrics at the Boston University School of Medicine. “The question of how to maximally implement this recommendation, which could have a profoundly positive effect on people of color, is one of the most important issues in health care for pregnant persons.” The techniques for implementation will likely vary by health care institution, he added.

Approximately 4% of pregnant patients develop preeclampsia in the United States. This multisystem inflammatory syndrome is often progressive, is the second most common cause of maternal morbidity and mortality, and accounts for 6% of preterm births and 19% of medically indicated preterm births.1 Risk factors for preeclampsia include1:

These disparities are “likely the results of structural racism and lack of access to preventive clinical services,” Dr. Silverstein said.

The updated recommendations are based on data from a systematic review of a clinically heterogeneous set of trials published from January 2013 and July 2019.4 Data on effectiveness were derived from 18 trials involving individuals at increased risk for preeclampsia.4 Aspirin dosages ranged from 60 mg to 150 mg per day and patients typically initiated therapy in the second or third trimester and continued use until delivery or near term. Almost all trials (n=17) included a matching placebo comparator.

Daily low-dose aspirin therapy was associated with a significant reduction in the risk for preeclampsia (Table), as well as the risks for perinatal mortality, preterm birth, and fetal growth restriction or delivery of a small for gestational age neonate.4 Maternal complications of preeclampsia such as death or eclampsia could not be evaluated because of the small number of cases found in the studies.

Updated Safety Data on Low-Dose Aspirin Use in Pregnant Patients

“The data that the Task Force reviewed shows that this is a safe intervention and that there were minimal harms associated with use of low-dose aspirin in pregnant persons,” Dr Silverstein said. “The benefits far outweigh the risks.”

Safety data came from studies conducted in average-risk populations and showed that bleeding harms from low-dose aspirin use were uncommon. Pooled results for risk of placental abruption, postpartum hemorrhage, or fetal intracranial bleeding with low-dose aspirin use were not statistically significant. Limited evidence on long-term child development outcomes did not show an increased risk for poor physical or developmental outcomes at 12 or 18 months or for congenital anomalies or malformation.

“No clear signal of serious harms associated with daily low-dose aspirin use in the second and third trimesters of pregnancy,” were found, the review authors reported.4

Rates of recurrent preeclampsia among women with a history of preeclampsia in a 2-hospital, single academic institution decreased by 30% after release of the 2014 USPSTF recommendation, according to a retrospective cohort study.5 However, implementation of these recommendations is not consistent in all populations.

The study included data from 27 programs providing services at more than 200 care sites across the US. Primary prenatal care providers included nurse practitioners, midwives, obstetricians, family practice physicians, and maternal-fetal medicine specialists. The study was funded by the Center for Medicare and Medicaid Innovation (CMMI) and published in the Journal of Health Care for the Poor and Underserved in 2020.

The findings showed inconsistency in aspirin recommendations regardless of provider type, with variation in providers’ recommendations within a single care site, said Dr. Cross-Barnet, PhD, who is a Social Science Research Analyst with the CMMI. “There were also practices in which no one was recommending aspirin or where they didn’t seem to be reviewing health histories thoroughly enough to determine who might benefit.”

Barriers to adoption of this recommendation include fragmented care, with patients seeing different providers from visit to visit, and inefficient use of electronic health care records, Dr Cross-Barnet said. Even if one provider recommended aspirin, there might not be follow-up about the recommendation at subsequent appointments, she said.

“Providers are often tightly scheduled and don’t have time for the kind of health review, education, and follow-up that would be needed for aspirin therapy to be effective. Few practices are able to implement team-based care where everyone who touches a patient is aware of their health status and what’s been recommended.”

“The fragmentation makes it hard for providers to keep up on all the nuances of each patient’s care and means other staff aren’t able to step in because they don’t have the information they need,” Dr Cross-Barnet continued. “Some providers also pointed out that the recommendations around aspirin have been updated a number of times, which they felt was confusing. However, these recommendations generally pointed to using aspirin more broadly, while the providers were more likely to respond by not recommending aspirin therapy at all.”

Strategies for Boosting Adherence to the Recommendation

Dr Cross-Barnet discussed 2 specific changes that would help improve uptake of this recommendation. “The first would be to articulate a policy at each site of care that all providers agreed to adhere to. Having providers use their own discretion not only misses patients who might benefit from low-dose aspirin therapy, but also confuses patients who are seeing multiple providers within a practice, which is typical. The second would be to have better teamwork. If all of the staff in a practice knew the recommendations and the practice’s policy, they could all support the pregnant patient in understanding the recommendation and adhering to it.”

“In our program, patients often spent far more time with care coordinators than clinical providers,” Dr Cross-Barnet explained. “The care coordinators could have helped with education and monitoring adherence, but in most cases, they had no awareness of aspirin therapy’s purpose or whether it had been recommended to a patient in the first place.”

Is Aspirin Therapy Effective in Patients With Chronic Hypertension Before Pregnancy?

For example, a study by Banala et al found no benefit of aspirin therapy on the incidence of superimposed preeclampsia in patients with chronic hypertension before pregnancy or pregnancy outcomes (ie, small for gestational age or preterm birth).6 The study authors suggested that using a higher dose of aspirin (eg, 150 mg or 162 mg) as suggested by the International Federation of Gynecology and Obstetrics (FIGO) recommendation should be studied in women with chronic hypertension prepregnancy. Optimal timing of initiation of aspirin therapy also should be investigated in this population, Banala et al noted.

Although the Task Force reviewed studies in which aspirin dosages ranged from 60 mg to 150 mg per day, the recommended dosage is based on the 81-mg tablets available in the US.

“The big picture issue is that starting low-dose aspirin within that dosage range early in the pregnancy, which the Task Force defines as after the 12 weeks of pregnancy, is what will have the best chance of achieving the best outcomes,” Dr. Silverstein said.

Is Preeclampsia Linked to Risk for Cardiovascular Disease Later in Life?

The Task Force published this recommendation statement “with a lot of enthusiasm because low-dose aspirin is a feasible, inexpensive, and safe intervention and the data are clear and consistent that it improves outcomes for high-risk pregnant persons and saves lives of newborn babies,” Dr. Silverstein concluded. “The news is very good.” 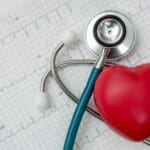 Heart Health May Help Prevent Diabetes, Regardless of Genetics