Several patients diagnosed with severe myopericarditis were found to also express autoantibodies against RNA polymerase III (RNApol3), according to a brief report published in the Annals of Internal Medicine.

The majority of acute myopericarditis cases are of viral etiology. Anti-RNApol3 autoantibodies are rarely detected, but when they are it is generally in the presence of severe systemic sclerosis.

Of 56 patients who were admitted to a single intensive care unit in France between January 2013 and January 2019 with suspected viral myocarditis, 11 also expressed anti-RNApol3 autoantibodies (RNApol3+ group; mean age, 34.2±10.9 years; 90.9% women) and were diagnosed with myopericarditis., The remaining 45 patients (mean age, 40±13.7 years; 46.7% women) had myocarditis and lacked these autoantibodies. In the RNApol3+ group, all of the 9 patients who were retested for the autoantibody (median, 4 months) still tested positive. In the RNApol3+ group, there were 16 hospital admissions, 4 patients experiencing ≥1 relapse (median time to relapse, 30.5 months), and 1 fatality.

Of the 11 patients in the RNApol3+ group, 2 had confirmed systemic sclerosis, both with mild phenotypes. None of the patients had renal crisis, diffuse cutaneous involvement, cancer, or pulmonary hypertension. Clinical findings indicative of possible systemic sclerosis were infrequent, except for Raynaud’s phenomenon (63.6%), which was deemed physiologic and unrelated to scleroderma.

Patients in the RNApol3+ group were more likely to be women (P =.008) and have pericardial effusion or documented influenza infection (P =.02 and P = 001, respectively). All patients expressing RNApol3 autoantibodies also expressed antinuclear antibodies (vs 24.4% in the RNApol3- group; P <.001).

“We believe that none of our 11 patients with antibodies against RNApol3 had myocarditis because of systemic sclerosis,” noted the authors. “These antibodies were present before the viral infection and facilitated development of severe infection or participated in virus-induced myocardial injury.” They recommended that future research explore the pathophysiologic mechanisms behind this phenomenon.

Disclosures can be viewed at www.acponline.org/authors/icmje/ConflictOfInterestForms.do?msNum=M19-3074. 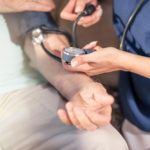