Compared with White people, those who are Black have higher cardiovascular risk when early-onset type 2 diabetes (T2D) develops, according to the results of a study published in Diabetes Care.

To investigate and compare the trends in early-onset T2D diagnosis of Black and White people as well as the trends of various risk factors at the time of T2D diagnosis, data from 606,440 individuals aged 18 to 70 years who were diagnosed with T2D between 2000 and 2018 were analyzed. Atherosclerotic cardiovascular disease (ASCVD) was defined by the presence of a clinical diagnosis of ischemic heart disease.

Over the past 2 decades, the rate of T2D diagnosis among Black patients within the age groups 18 to 39 and 40 to49 years has consistently been higher than that of their White counterparts (P <.01). The proportion of both Black and White patients diagnosed with T2D before 50 years of age increased significantly from 2012 to 2018 (P <.05).

Taken as a whole, the results of this study illustrated the increasing burden of early-onset T2D and the increased risk of MACE-3 for Black patients. Understanding the trends in diagnosis of early-onset T2D and the differences in the prevalence of related comorbidities among people of different ethnicities may improve healthcare practitioners’ ability to detect and manage this disease.

Limitations of this study include the use of electronic medical records, which may have resulted in errors in data collection due to condition coding, and the fact that the database did not link directly to hospitalized data.

Future investigation into potential explanations for the differences between ethnicities observed in this study are warranted. 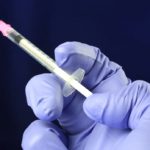 High-Dose Trivalent Flu Shot No Better for Patients With CVD